Ask any teacher, should your teaching match the learning style of each student?  Almost guaranteed, they will answer an enthusiastic “Of course!”

The precept of neurodiversity supports this responsive attitude.  All brains are different.  Kids learn differently.  Play to their strengths and support their weaknesses and we can help all children reach their potential.

While talented teachers all over the world adhere to this theory; plan for student diversity; and implement lesson plans with auditory, visual and kinesthetic aspects, there are still some sacred cows that many teachers just don’t want to let go of, responsive teaching and neurodiversity be damned! 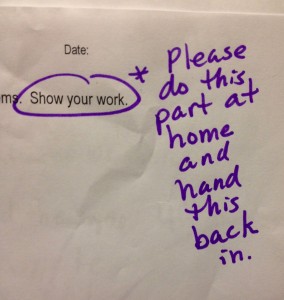 One of those sacred cows, near and dear to the heart of math teachers the world over? Show Your Work!

First off, let me say that in most circumstances, with most kids, this is a great rule.  It shifts the focus from product to procedure, from correct answer to thinking process.  It encourages meta-cognition.  It allows the teacher to analyze the student’s thinking process for breakdowns, and makes it more likely that a student actually did the work to get the answer, rather than getting it from a friend, the back of the book or mom or dad.

But there are two groups of kids for whom showing their work can become the most painful part of their nightly homework.  The rigid requirement to Show Your Work can actually interrupt the learning of kids with Dyslexia (especially those who also have ADHD) and kids with a certain style of Autism Spectrum Disorder (ASD).

What both of these types of kids have in common is a brain that makes intuitive leaps in a single bound.

According to Drs. Brock and Fernette Eide in The Dyslexic Advantage, on a neurological level, the dyslexic brain is tailored to grasp the big-picture more than the details.  These kids often look challenged in math when the focus is on memorization and detail analysis, but with the proper support, they shine in Algebra and higher math.  One of my former students, Franchesca* (whom I’ve mentioned before), could be a poster child for this phenomenon.  Show her a one or two step Algebraic equation, and she’d leap to the answer.  Ask her how she did it, and half the time she’d shrug and say, “I just figured it out.  It’s obvious.”  Ask her to write out all her steps all the time, and she’d glare at you as if you just asked her to scrub the bathroom in Central Station with a toothbrush, especially because she also had ADHD, which made repetitive, detail-oriented work torture for her.  After butting heads a few times, having her explain to me again why she didn’t write out her work, I finally listened.  So we compromised: she had to show her work on one or two of each type of problem; then, as long as her answers remained accurate, she could skip writing out all the steps for the others.

The case of kids with ASD is a bit more complex.  We tend to think of ASD as a right-brain problem; most of these kids are left-brain, step-by-step, logic, detail-oriented type of thinkers.  Right brain activity–creativity, socializing, and visualizing tend to be a challenge. 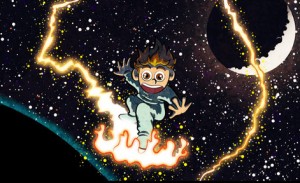 One subset of these kiddos, however, seems to have a, unusually strong ability to visualize abstract ideas.  In fact, noted Autism advocate Temple Grandin’s autobiography is entitled Thinking in Pictures.  According to her brain scans, this may be due to “enhanced’ connections…in the left precuneus, a region involved in episodic memory and visuospatial processing.”

Many biographies of Einstein note his remarkable ability to visualize the concepts he was exploring: his quest that ended in the theory of relativity started as a child when he asked himself what light would look like if one were riding a lightening bolt.  Often, these kiddos’ amazing ability is obscured because they struggle to create a link between their developed, abstract pictures and the language to express them.

Facing a math problem, these students often find the solution with breathtaking rapidity, most likely based on the accurate, abstract visualization of the problem in their mind that makes the solution obvious.  The problem arises when they are then asked to show their work.  Let’s face it; we mostly left-brain teachers are asking them to translate their intuitive, right-brained, image-based work into very left-brained, step-by-step language.

We had a student with autism in a school where I taught, who had that kind of mind in math.  He could intuit the answers to complex problems in one fell swoop, but had difficulty explaining his breath-taking leaps.  In fifth grade, he ran into a teacher, quite talented in teaching math to typically gifted kids, who was very left-brain in her approach to math.  She required kids to write their steps down and to construct written reflections about their thinking.  Our not typically gifted student not only hated doing either; he often simply could not fully articulate how he made his leaps.  Not surprising, since, well, kids with autism often have trouble connecting the pictures in their mind to language.

The teacher was chatting with me one day and said she would not let him go on to the next problem unless he wrote down all his steps. “You know,” she confided, “people say he is brilliant, but if he can’t explain how he got the answer, he doesn’t really understand the math.”

Ask this teacher if she respects neurodiversity, her answer would be of course.  Ask her if she is responsive to different learning styles and she’d say always.  And often she was.  But in this instance, she simply could not fathom his understanding math in a way so incredibly foreign to her.  Although her assertion that he “doesn’t really understand the math” was belied by his consistently getting the correct answers, she just couldn’t muster the mental flexibility to accept the full extent of his neurodiversity.

So no, I’m not advocating throwing out Show Your Work for most kids most of the time, because it helps most kids most of the time.  But I am asking you to look critically at even this most cherished rule when you get a kid who chafes against it more than usual.  Really look at why they are chafing.  Is it your garden variety, “It’s hard and I don’t like to,” resistance, or is there a valid and compelling neurological reason why your flexibility with this requirement will be what helps your student achieve their full potential.

After all, no one wants to be the math teacher the next Einstein hated. 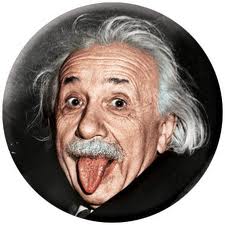