I just got a text from a friend of mine. You could hear the panic in her texted words: “I have never seen him do this before, but [my son] (8) just showed us a comic he was drawing and he had mirror written a few of the words. He didn’t seem to notice it or see anything wrong with it and then just said he forgot which way to write (left to right or right to left). Of course, I am worried something is wrong.” I asked a few follow-up questions. Does he like to read? How is his spelling? Does he generally get his left and right mixed up? After hearing that he loves reading, is great at spelling and generally has no problem with left or right, I reassured her all was in all likelihood ok. She responded, “Of course I hardly slept.” 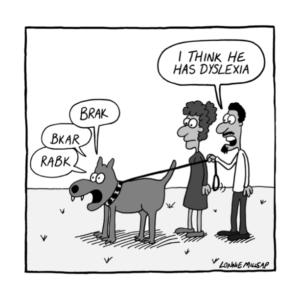 So, on behalf of my friend and parents everywhere who start panicking when they see those backwards letters, let’s start with what dyslexia is not.

Dyslexia is not seeing letters mixed up or backwards, or seeing words mixed up or backwards. In fact, it is developmentally appropriate for kids in kindergarten and first grade to reverse some letters. If they don’t outgrow it by the end of second or mid-third grade, then it may indicate a difficulty with directionality, which may make reading and writing more difficult.

And it is certainly not a lack of intelligence or talent.

So, if dyslexia is not any of these common misconceptions, what is it?

According to the Diagnostic and Statistical Manual, fifth edition (DSM-V), the medical world’s dictionary/bible, dyslexia is a sub-category of Specific Learning Disorder: an Impairment in Reading. To quote: “Dyslexia is an alternate term used to refer to a pattern of learning difficulties characterized by problems with accurate or fluent word recognition, poor decoding, and poor spelling abilities.”

Now that we have that all straightened up…just joking!

Let’s parse that definition a bit, shall we? Specific Learning Disorder is a general term that means there is a problem learning, but there is no pervasive or physical problem that explains the weakness. That is, these are kiddos with average to above average intelligence, who don’t have a physical problem like blindness or deafness that would explain their difficulties.

In this case, the difficulty is defined as “Impairment in Reading.” Why isn’t it actually referred to as dyslexia (which is Greek after all for trouble with words, eg, an impairment in reading)? Well, the term dyslexia was developed by the medical community. When it started to be used in the educational world, experts felt that the term was too medical and therefore too obscure, and that it would be better to use more straightforward, lay-people terms, like Impairment in Reading. This makes some sense, except that by now, everyone knows the term dyslexia, and they may not know what is meant by “Impairment in Reading.” I can’t tell you how many parents I know have paid for a whole psycho-educational report, who know that their child has a “Specific Learning Disorder: Impairment in Reading” who then ask me in hushed tones, “Do you think she may also have dyslexia?” So, are we really being more clear avoiding that term?

Let’s move on. The DSM-V definition goes on to refer to “a pattern of learning difficulties characterized by problems with accurate or fluent word recognition, poor decoding, and poor spelling abilities.” 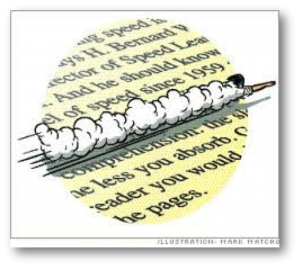 “Accurate or fluent word recognition” means that a person recognizes most common words automatically without having to pause to sound them out, and does so without error. This is a developmental definition: most first graders are going to need to sound out most words, while by third grade, most kids will be automatic on most words, but may still struggle to sound out three or four syllable, unfamiliar words. And who of us doesn’t struggle a little bit over completely unfamiliar, complex scientific words or words from another language (seriously–did you know Hermione had four syllables instead of three before you heard her name somewhere?). This is why assessments for dyslexia always compare scores to those of kids from the same age group. So, a student with dyslexia has trouble either with speed or with accuracy or both in their reading, and they have significantly more trouble than kids in the same age group.

Decoding is a fancy way of saying “reading,” as in “cracking the code of letters to find the sound and therefore meaning of the word.” So poor decoding means weak reading skills, especially those of sounding words out.

Finally, this is the first time the definition of dyslexia has included a reference to spelling. A student’s ability to spell is actually a great proxy for how they will read. If there is a discrepancy–if they read well but have a lot of trouble spelling, chances are they are accessing words mostly through sight words and are still having trouble making the one to one correspondence between letters and sounds. Correspondingly, word study aimed at better spelling has more of an effect on reading skill than reading has on spelling.

So, it is important to know that dyslexia is an umbrella term for disorders that involve difficulty in learning to read or interpret words, letters, and other symbols, but that do not affect general intelligence.

However, in the last twenty years, there have been major breakthroughs in understanding what causes dyslexia, at least from a processing perspective. 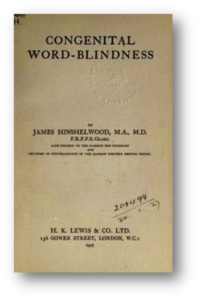 In the US, dyslexia was originally called “Word-blindness” and experts thought that it was 100% about vision. This stubborn insistence that dyslexia was all visual led to quite a backlash in the US, such that people will vehemently tell you it is never visual. At this point, the visual component of dyslexia is quite controvertial. Interpretation of the research goes from showing that visual components never have any part of dyslexia, (which is the official stand point of the International Dyslexia Association (IDA)) to that they sometimes have a part to play, to that they are the main component of dyslexia. More research needs to be done to reach a consensus. However, it does stand to reason that since reading involves linking the sound part of your brain with the visual part of your brain, a weakness in either area would make learning to read hard. Know that there is no consensus about it, and do your own research based on your own child or your own situation.

If a student has a lot of trouble with visual processing, the path to remediation is through a behavioral or developmental ophthalmologist, who can do vision training to help the eyes work better and more efficiently together. Because this field is controversial, it is especially important to get a good referral by talking to people who have gone through the program of a given practitioner, including people who went through it more than a year earlier, as some people claim that any improvements that may occur are temporary. So I will finish by saying vision therapy may not work, except for the times that it does. Meanwhile, try larger fonts, more white space and non-serifed fonts like Verdana and Helvetica, which are easier to read.

What scientists do now know is that the main processing weakness in dyslexia is weak phonemic awareness. Phonemes are the smallest bits of sound in language, the /c/ in cat, for instance.Most kids from birth to age five or so are picking up language like a sponge. They are not just hearing whole words, however. Their brains are breaking each of those words down into component sounds. So they may learn the word cat, but they also have stored away the sounds /c/ /a/ and /t/. So, when they get to kindergarten and their teacher says, “Ok, class, C says /c/,” they think, ah, the sound /c/ is represented by that C.

However, the brain of a kid with weak phonemic awareness has not really been parsing those words into their component sounds. So when the teacher says, “Ok, class, C says /c/,” they think, “Huh? What is this /c/ thing? I’ve never heard that in my life. I’ve heard /cat/ but what is this /c/.” Clearly, this makes it difficult to learn to read. 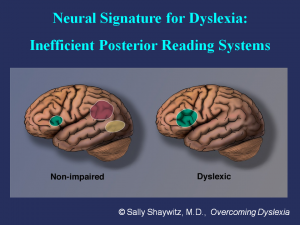 The groundbreaking work of Dr. Sally Shaywitz, who wrote Overcoming Dyslexia, found that the brains of non-dyslexic readers light up the sound processing section of their brain when they read. The brains of dyslexic readers, on the other hand, light up in the visual regions. In other words, they are still seeing the letters as visual elements, whereas non-dyslexic brains have mapped the sound of the letter onto its symbol so effectively that their brain automatically processes letters as speech.

Her research went on to show that with proper remediation–explicit, systematic, multisensory phonics instruction–the dyslexic brain can be taught to map the sounds onto the letters. Her demonstration of neuroplasticity (that the brain can change with input even after what we consider the window of opportunity) gave hope to kids with dyslexia and their parents around the world. It also showed how important this phonemic pathway was to reading fluently.

But we can’t stop there. Dr. Maryanne Wolf found that, while phonemic awareness was almost always the prime component of dyslexia, it was not always the only one. What Dr. Wolf found was that rapid naming–literally how fast a person can name an array of numbers or letters or objects–had a significant part to play in dyslexia for some people. She wrote about what she called the “double-deficit” hypothesis. She found some people with dyslexia had just a phonemic awareness weakness, and some had only a rapid naming deficit, and a third group had both weaknesses. Not surprisingly, this third group of kiddos had the most severe dyslexia and responded to explicit phonics training the least.

Researchers are not quite sure why rapid naming affects reading, and whether it is a proxy for an underlying process such as retrieval speed or executive functioning. These underlying processes are very hard to remediate. We just are not sure that we can make a brain that processes slowly process more quickly. 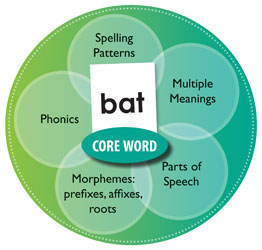 However, what Dr. Wolf did find was that the more connections there are to any given word, the faster it is read. That is, if a person can connect sounds and chunks of meaning and personal meanings to a word, it will be read faster than if they just know how to decode the word.

To sum up, dyslexia is primarily an auditory weakness in phonemic awareness. Secondarily, there may be a rapid naming deficit complicating matters. And lastly, there may also be a visual processing weakness on top of everything else. So, don’t worry about reversals in reading or writing, unless they are frequent and persist after second grade and they fit into an overarching pattern of difficulty with reading and spelling. My friend’s son, who had written a word backwards once, also loves to read, reads voraciously with good comprehension, writes well and is a great speller. He’s not dyslexic; he’s just 8 years old. 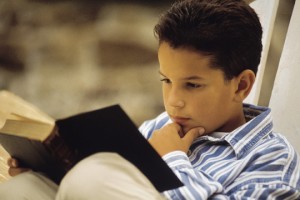