Many of the kids who come to me have what I would refer to as garden-variety dyslexia. Bright, verbal kids you would expect to be reading voraciously and writing down all the great stories they love to tell, but who struggle to read or write fluently. The most common cause of these kiddo’s struggles is weak phonemic awareness (the ability to recognize, isolate and manipulate the smallest parts of speech, like the /c/ in cat). This weak phonemic awareness leads to weak phonics (the mapping of sound to print) and thus to weak reading and writing, especially spelling.

This blog post is about the kids who learn to read fine, but somehow still struggle to comprehend what they read. It’s about the kids who spell like a champ, but freak or freeze when asked to write, especially if asked to come up with their own ideas. While the former group of kids is referred to as having dyslexia, these kiddos have what is called hyperlexia: reading words really well, but without sufficient comprehension. 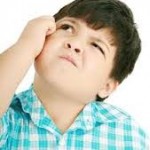 Did the author say why?

These kiddos often fly below the radar for years because they sound like such expert readers. They often picked up reading early and read–that is decode words–way above grade level. Listening to them, it is hard to believe there could be anything wrong. But start asking them comprehension questions, and they draw a blank. Ask them to make inferences about what they have read, and they are deer in the headlight.

Before you get frustrated with them and start nagging at them to pay more attention or try harder, realize that this is a pattern of strengths and weaknesses that, while not as common as dyslexia, is out there.

When you run across a kiddo with weak reading comprehension and you’re just not sure why, go through this checklist.

Obviously, some of these skills are developmental (a four-year old who assumes all the babysitters know each other is normal; a seventh graders who still assumes that, not so much). There may be other reasons for some of these weaknesses (difficulty following oral directions could indicate weak working memory or attention or auditory processing, or that you are talking to a teenager). But the pattern of strengths and weaknesses at least points you in the right direction. 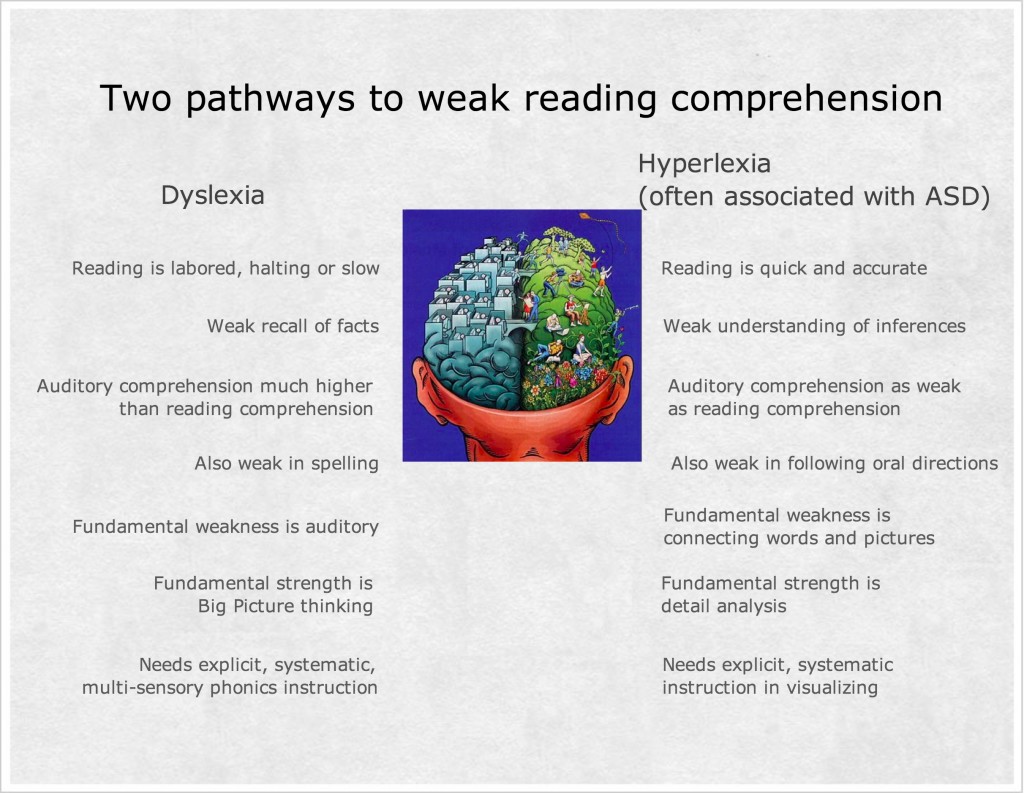 So, what do you do if you have a student or a child who is, in fact, hyperlexic? The quintessential remediation for these kiddos is Lindamood Bell’s Visualize and Verbalize. V/V, as it is referred to by people in the know, was created to help build a bridge between a student’s language processing area and a student’s visual imaging area, roughly corresponding to the left and the right hemispheres. It is the difficulty translating words into what Lindamood Bell calls “an imaged gestalt” that accounts for a person with hyperlexia’s unique pattern of strengths and weaknesses.

While a student with dyslexia may have trouble gleaning meaning from text because the act of decoding is taking up too much of the processing power in the brain, a student with hyperlexia reads the words with ease, but has difficulty connecting them to the meaningful images or pictures in their mind. The words stay words on a page and are never transformed into the movie in our head that those of us who love reading enjoy. Comprehension stays behind on the page with so many words.

When you have a student or child with weak comprehension and it just doesn’t seem to fit because she “reads so well,” take a look at the overarching pattern of strengths and weaknesses. It isn’t lack of attention or effort, and if it isn’t lack of decoding skills, then it may be that the child needs help, not connecting sound to print, but connecting words to meaning.

*Diana Kennedy and MindSpark is NOT Lindamood-Bell Learning Processes nor is it affiliated with, certified, endorsed, licensed, monitored or sponsored by Lindamood-Bell, Nanci Bell, Phyllis Lindamood or Pat Lindamood. Lindamood-Bell – an international organization creating and implementing unique instructional methods and programs for quality intervention to advance language and literacy skills – in no way endorses or monitors the services provided by MindSpark or Diana Kennedy.