When I talk to non-teaching adults about teaching reading, I often hear, “Phonics can’t be that important.  I never learned those rules and look at me!”  Yet the preponderance of evidence collected over decades of study agree that phonics is the key to reading efficiently.  Why the disconnect?

I don’t remember learning it that way.

When I taught Huck Finn to my 8th graders, I had very clear and fond memories of the discussions led by my incredibly talented high school history teacher to draw on.  Likewise, the culminating creative writing project unabashedly borrowed from my equally talented English teacher from senior year. 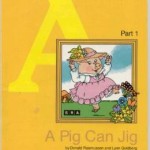 My one memory of learning to read

But here’s the thing.  I have maybe two clear memories of first grade.  1) My teacher’s name was Erika.  2) I read Pig in the Jig to a kindergartener one day.  Oh, and Pig in the Jig was orange, so three memories.

So when I think about my own experience learning to read, well, I got nothing.  I would guess that most adults have a similar number and quality of memories.  Most of us learned to read so early that our memories of actually learning are foggy at best.  This gives us the impression that our reading ability emerged, Athena-style, fully formed from our brain.

The lesson?  Don’t confuse what you remember about learning to read with how you actually learned to read.

No, really.  I didn’t learn to read that way.

So, maybe you have written transcripts of your first grade year, or you have visited your first grade teacher and discussed pedagogy, or your mom or dad told you that you learned to read during the age of Whole Language, and actually never did learn any phonics rules.

Ok.  I believe you.  It happened.  In fact, my rabbi from Northwestern University knows he was taught to read through Whole Language.  How does he know this?  He still can’t sound out unfamiliar names.  However, he is a scholar and an author and no one can call him illiterate.  So phonics isn’t necessary to read, right?

Wrong.  For about 20% of the population, explicit phonics instruction isn’t necessary to read, but knowledge of phonics still is.  Those 20% are lucky enough to have all the neurological wiring to allow them to infer most phonics rules and patterns.  Many of that 20% need to be taught the basics and then they read voraciously and their brains infer the rest.  Awesome.

But the hallmark of a dyslexic student is that their brain does not infer the rules.  The more severe the dyslexia, the fewer rules get inferred and the more rules need to be explicitly taught.

I taught a kiddo with dyslexia who had learned that ow made the sound /ow/ as in “That hurts.”  So, she spelled couch cowch.  A person without dyslexia sees that and thinks, “Yikes.  That obviously can’t be.”  But I needed explicitly to teach my student that ou is used in the middle of a word and ow at the end of a word (and with n or l).  As you look at this, even if you don’t “know” the rule, you are probably thinking, “Oh yeah.  That does seem right.”  That is, if you do not have dyslexia.  But my kiddo needed the rule explicitly taught.  And I’ll tell you what: she was so happy to learn the rule.  She often said, “Why hasn’t any one just told me this before?”

But I don’t even know any phonics rules!

Here’s the thing: you know more phonics than you think. You may not be explicitly aware of rules, but if you can spell and read and write well and with automaticity, your brain has already stored the phonics rules.

For instance, if we were playing scrabble and I tried to convince you that jrav was a really esoteric word for, I don’t know, a small tool used in beading, you would know it wasn’t a possible English word.  Why?  Your brain would recognize that jr is not an acceptable consonant blend.  It would also recognize that v never ends a word in English.  This is why you never try any jr words when playing scrabble; your brain maps what it knows about English phonics onto the spelling and rejects what can’t work.

The brain is hard-wired to learn how to speak.  Evolution has wired in the acquisition of oral language, including a predilection for picking up grammatical structure.  The brain is not hard-wired to learn to read.  In fact, in what Stanislaus Dehaeneterms “neuronal recycling,” the brain has to recruit and rewire both the visual and the auditory/speech areas in order to connect the two into the capacity to read and write. 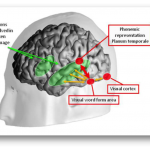 Because reading recruits the auditory part of the brain, we can say that reading is mapping speech to print.  Studies show that to take advantage of this in the most efficient way possible, words need to be decoded and encoded based on phonics first, before they eventually become sight words through practice.  Starting with them as sight words–that is, recognized as a whole rather than as component sounds–is a great way to get kids into reading trouble later on.

I taught a 4th grader who was exceptionally bright (he scored in the 99th percentile for many subtests, including story comprehension and recall) and highly dyslexic (for instance, he scored in the 8th percentile on writing fluency and decoding efficiency).  He over-relied on sight words: generally that meant he looked at the first letter and the length and shape of the rest of the word.  The technique served him well in first and second grade, when his reading contained fewer and simpler words.  By the end of third grade, his teachers and parents were concerned enough to get him tested.  By the time I tested him in 4th grade, he read ignorant for ingredients.  His non-phonics-based, whole word technique had become a big problem.  This is the same reason why so many other kids with dyslexia, especially the very bright, verbal ones, seem to float by reading slowly but acceptably in first and second grades, but hit a brick wall in third.

But my child has been reading Harry Potter since before birth.  I don’t want her slowed down.

I know.  I’ve taught these children too–the 20% who just get reading.  My colleagues and I used to joke that they were closet kids–put them in the closet with a pile of Harry Potter books and they’ll come out at the end of the year reading better than ever.  Still, here are two things to keep in mind.

Explicit phonics for precocious readers is an exercise in metacognition: becoming aware of what they know.  With this focus on instruction, they build their decoding skills to be able to tackle complex, multi-syllabic words. 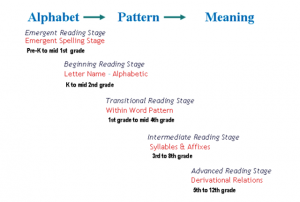 Explicit phonics also continues into morphology (meaning bits, like un and dis) and what Words Their Waycalls the “meaning/spelling connection.”  These are the kiddos who enjoy and benefit from exploring the connection between that silent g in sign and the voiced g in signature, or between the Greek mythological character Chronos and the words chronological, chronometer, synchronistic and anachronism.  With a well-designed differentiated classroom, these advanced kids can really benefit from moving from explicit basic phonics instruction into advanced word study, which bridges into vocabulary and linguistics.

The next time you discuss how kids learn to read (’cause I know it’s such a common cocktail party conversation!), remember

1) Speaking is a natural act; reading is not.

2) The most efficient pathway for learning a word is through the individual sounds of the word, ie, phonics.

3) About 20% of brains can infer many of the phonics rules from reading.

b. The more severe the dyslexia, the more phonics rules will need to be taught.

4) Explicit phonics instruction, while absolutely necessary for 80% of students, is not bad for anyone, and can be adapted to stretch and challenge those 20% kids.

With these four handy facts, you’ll be the toast of your next cocktail-party discussion about pedagogy, and it may even give you a hand up for your next game of Scrabble!