End of the Year Blues, II

End of the Year Blues, II

You all know the old joke: What are the three best things about teaching?  June, July and August.  Now, I love a good summer break as much as the next teacher.  But I always dread it too.  Why is the ending so bitter sweet?  Because it isn’t only the end of grading homework and getting up early; it’s the end of a unique community.

Every classroom is a community.

Every teacher I know spends a huge amount of time and energy building their incoming, often chaotic group of little ones into a cohesive, supportive community.  From getting to know you activities in September to on-going problem solving, sharing and group work throughout the year, the kids get to know each other, the teacher and themselves as part of this group.

Ask any third grader who is the artist in your class or who the writer and they’ll tell you without hesitation.  Ask a fourth grader which classmates think dogs rule and cats drool and which ones fervently defend their feline friends, and they’ll know.  Even Middle and High schoolers can tell you which of their classmates they text to get the homework assignments and which they text to get clarification on the math lesson (and which ones the sit next to if they are feeling like giggling during class).  That is all to say, these kids get to know each other; they become part of a community.

Ask any teacher about classroom behavior, and they will tell you that there is a clear and consistent cycle each year: you have to work hard on it in the Fall, get to relax into a solid routine in the Winter, and then have to refocus on it in late Spring.  Why, my colleagues and I bemoan in April, do we have to go over the rules for tether-ball now!  Did all my students really forget how to stand in line or share scissors over Spring Break?  After seven months of practice, how is that even possible?

Battle-weary teachers bandy theories about over the coffee machine: Spring Fever, beautiful weather outside, excitement for the summer.  But a few years ago I realized another factor was unraveling the hard-won structure in the classroom: anxiety about leaving behind the class they have become part of.

Around mid-May one year, I heard a piece on NPR about military spouses getting into squabbles right before deployment.  Psychologists explained that it is easier to take your leave of someone when you are angry or annoyed at them than when everything feels perfect.  The latter is just too sad.  So, unconsciously, we humans spend our last few precious days picking fights, building up the annoyance that will make good-bye feel a little less bitter.

My next morning was filled with a gazillion little aha moments.  Ben and Chris*, best friends since October, arguing over whether Ben purposefully threw the ball out of bounds.  Melanie and Sarah, not speaking to each other because Melanie had wanted to play on the grass and Sarah insisted on the jungle gym.  These kids aren’t crazy, I (finally) realized; they’re scared. 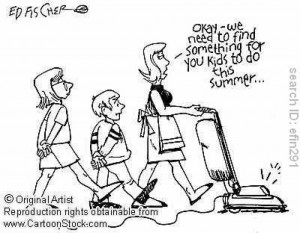 So for the first time, we circled up and talked about it.  Yes, we were super excited about summer.  Yes, it would be great to sleep in, have no homework, go to camp.  But, hey, we were also going to miss each other.  Although it seemed so appealing, it was hard to go from six hours a day surrounded by friends to a house with only parents and siblings, when you had to work to set up play dates instead of just running out to recess or lunch.

Kids shared what they would miss, whom they appreciated, what they had learned from whom over the last nine months.

Now, I won’t pretend I morphed into Michelle Pfeiffer and all conflict magically disappeared as we faded to black in cinematic bliss.  But conflict did decrease, and as we continued to check in and revisit our ambivalence about the end of the year, a tenderness emerged.  Students (and their teacher) learned that we humans often feel contradictory emotions about the same subject at the same time.  So, even though it was harder to say goodbye when the time came, it was also sweeter and more real.  It also left me more ready to embrace the new unique group of little individuals that came my way the next year.

Children’s names have been changed.  A version of this post originally appeared on this blog on August 2nd, 2013.