Cross-cultural What? (Happy Easter and Passover)

Cross-cultural What? (Happy Easter and Passover)

It’s my second year teaching elementary school. My third graders at this primarily Hispanic charter school in the Fruitvale district of Oakland are all preparing for their First Communions in their all-Spanish-speaking Catholic churches.

At Passover, I bring in a picture book and matza and the ingredients for charoset, which we make as a class. During the discussion, I tell them that the Last Supper was, as far as we know, a Passover Seder, and that when Jesus said, “This bread is my body and this wine is my blood,” he was holding up matza. This is why, I continue, the communion wafer is a thin piece of cracker, like matza.

A few weeks later, during circle time, one of the girls is sharing all about her First Communion. In the middle of the story, she breaks off her English and switches into Spanish to ask for the English translation of a word she needs. No one has an answer, so she thinks for a bit and says, “Ah. So when the Priest told me to take the matza…”

That moment when you realize that because of you there will be about twenty bilingual Catholics wandering around Oakland referring to their communion wafer as matza. 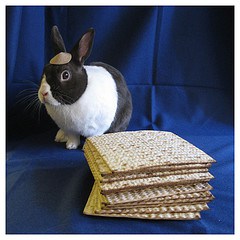