An Homage to Mr. Briley, or It’s the Relationship, Stupid

An Homage to Mr. Briley, or It’s the Relationship, Stupid 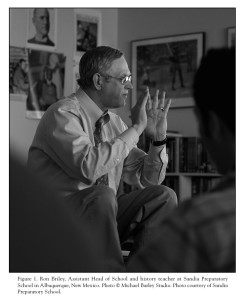 One of the best teachers ever

I recently got the news that one of my very favorite teachers of all time–my high school History teacher, Mr. Briley–is retiring. Although it has been 27 years since he was my teacher, I was dismayed. It hadn’t occurred to me how much saner the world felt knowing that back in a small prep school in Albuquerque, New Mexico, he was still teaching students to know about, understand and analyze the world. Although his retirement will have no physical affect on me, I feel like the ground has shifted under my feet.

As an educator myself, I have often aspired to model myself on him, and have spent time trying to analyze what made him so excellent. In truth, I have to say that his pedagogy was nothing earth-shattering or unique. One could even call it old-fashioned. The majority of our time was spent in straight-up, teacher-centered, full-frontal lecture.

A Gentleman and A Scholar

To be sure, his was an exemplar of said old-fashioned teaching. His lectures were first class, top of the line, well-organized and insightful, filled with engaging storytelling, silly jokes and musical references (mostly to the music of the 1960’s). But they were rarely supplemented with multimedia, or group work, or role-play. Discussions were limited to answering his questions before moving on to taking more notes. His hand-written, photocopied outlines of the material were great scaffolding for note-taking (I can to this day put almost any lecture in outline form as it comes out of the speaker’s mouth), but we spent no time in groups meta-cognitively analyzing why the outlines worked, or discussing what made a good outline.

Nonetheless, Mr. Briley was the teacher you thanked at graduation, you mentioned in the yearbook as one of your greatest influences, and you visited long after the last day of school. In fact, he was the first person I called, in tears, during my first crisis as a teacher–and I was 26 by then.

This was true not just for me, but for almost every student at the school, from A students to C students, students with a predilection for history and those whose interests lay elsewhere, students who loved school and those who hated everything about it–well, everything but Mr. Briley.

Mr. Briley was one of those very rare teachers who made it clear he loved us and supported us, no matter who we were or what we did. We somehow knew in our hearts without having to be told that he was our advocate and ally, that he was in our corner, come what may and that in the great struggles of adolescence and young adulthood with its shifting identities and alliances, he was on our side. Period. End of story.

I am not even sure how he managed to communicate this so clearly and absolutely. He never had to say it. It wasn’t the rumors you might have heard of a disciplinary meeting where he literally barred the door to keep the rest of the faculty from leaving when they had decided to kick an eighth-grader out for bringing alcohol to a school dance (the fact that her parents were in the middle of an ugly divorce seemed irrelevant to many of his colleagues). Or the fact that he eternally retained the aura of student activist and protestor from his time in college during the 1960’s. Perhaps it was the easy way he tossed nicknames around, teasing us just a bit about our foibles in such a kind way that we felt more appreciated for them, not less. Perhaps his hilarious self-deprecatory stories–like the one about losing his keys on the way to the car, rushing in to get his second set from the house, and realizing when he got to school that the first set had been in the door of the car the entire time–that made us feel more at ease with our own human faults and limitations. Perhaps it was his unwavering empathy for humankind expressed through his lectures that assured us that we too rested safely under the wing of his understanding and compassion.

All I know is that when students had a problem with other teachers, they often went to Briley for help. When they had conflicts with their parents, his was the door to knock on. And perhaps after all, it was simply the fact that he listened to it all that made us so certain of his love and admiration. Admiration that seemed miraculously to have nothing to do with your last test grade, or your last essay, or even how well you took notes during his funny, well-organized, full-frontal, old-fashioned lectures. At a time when all relationships seemed fraught with risk, in a context where all regard seemed conditional, Mr. Briley blessed us with the greatest gift a teen could ask from an adult. Unconditional love and acceptance.